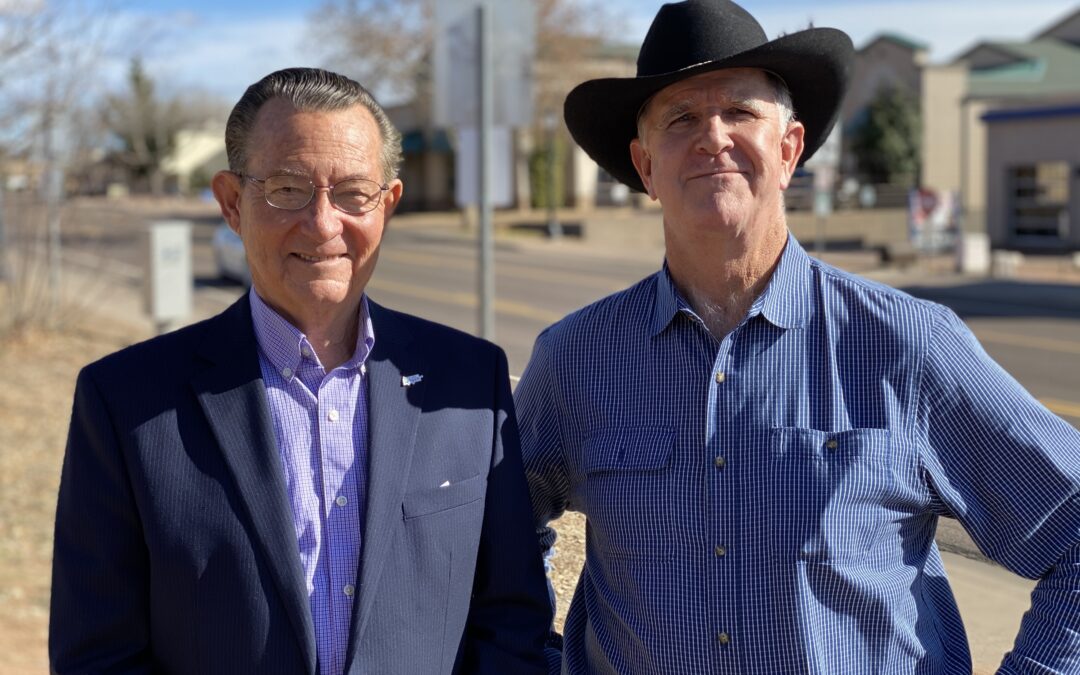 The fascinating history of the Payson hospital is the topic up for discussion as MHA Foundation President Kenny Evans visits with Jon Cline, president of the Rim Country Education Alliance (RCEA).

History tends to get more exciting when viewed through a firsthand lens, and that is what Cline offers in the telling of the evolution of healthcare in Payson. A lifelong resident, Cline recounts the birth of his mother in the mid-1920s on Bootleg Alley, delivered by Doc Risser.

“Very deep roots in the community,” Evans says of the Cline family, which seems to be something of an understatement. It is hard not to be amazed at the stories he tells.

Indeed, when it comes to healthcare needs in the “early days of healthcare in Payson,” Cline seemed to have them all.

Self-described as a “stubborn” child, he garnered more than his fair share of calamity in his young years. At the age of just two, in the mid 1950’s, when Payson was still “remote, and really quite isolated” at a population hovering just under 2,000, a time where there were no televisions, few telephones, he had a spill. Quite a spill. His mother sought out the advice of the local druggist, Don Manthe. His advice was to put the tyke down for his nap, if he could walk after, he was fine, perhaps just a sprain. If not, maybe it was broken.

After the nap, Cline couldn’t walk. Without access to x-ray facilities in Payson, the Clines called upon a friend with an airplane, took off down what is now Aero Road (then the airport), and flew to Cottonwood. When he returned to Payson, the verdict was a spiral fracture through what he would call “my calf bone and my thigh bone,” and a full body cast to accommodate it.

Cline ruefully recalls that his sisters, including current Gila County Supervisor Tommie Cline Martin, at the time had to do most of the shuffling around with him.

“Rotund.” He laughs in remembrance, describing his toddler frame.

“I was a heavy and spoiled child, and my sisters bore the brunt.”

That was far from his last encounter with the medical field. Over the next decade, Cline would often find himself in need of medical assistance still yet above Payson’s pay grade. At age four, he fractured his skull. At six, broke his collarbone. He jokes recollecting that he “skipped” age eight, but at 10, he lost his thumb as it was severed while roping calves. At 12, he broke his nose and cheekbones. It might be safe to say the modern day hospital facilities we enjoy today are in some part thanks to Jon Cline’s horrific string of injuries and the need for emergent medical care that was so often required as a result.

Cline recalls the two mothers that began the conversation about the need for a hospital. Gladys Meredith and Doris Taylor — mother of Payson resident Angela Godac, were having coffee and lamenting a healthcare crisis of Taylor’s son, Eddie, which was potentially life threatening without local resources to draw upon. The two mothers “had enough” of the small town healthcare drought.

The need: a hospital. The way to get it? Local fundraising. The philanthropic organization of the day were women. Specifically, The Woman’s Club and its offshoot, The Junior Woman’s Club. The Junior Woman’s Club, of which Meredith and Taylor were members, along with Cline’s mother Pat, and Lena Jean Haught, began with a full grassroots force. Early campaigns for funding included family variety shows, bake sales, and local fashion shows. With such humble beginnings, they built the first organized clinic in Payson.

Times were different, Cline admits. Rather than asking for permission, he says, “If they wanted to get something done, it was up to them to do it. These ladies did that.”

Funding was always a concern. He credits generous benefactors of the early days of the clinic like Lena Chilson, Nan Pyle, along with others, who gave “a fortune” to keep the newly seeded clinic financially viable and the doors open.

The philanthropic roots quickly outgrew the bounds of charity work, requiring a more significant structure. Soon, Payson Regional Medical Center, Inc. was incorporated, and the assets transferred from the Junior Woman’s Club to the corporation. An auxiliary was formed to better manage the operational business of the young hospital. The late 50s and early 60s saw a new corporate entity with ownership of the area hospital.

The decades that followed had many more financially trying seasons. Funding was always a real issue for small town rural hospitals around the country. Many shuttered in bankruptcy. Thanks to the dedication and perseverance of Payson’s founding families, such was not the fate of the Payson Regional Medical Center, and its eventual evolution to the Banner Payson hospital of today.

Cline reflects that by today’s standards, that first hospital would appear quite primitive. Things taken for absolute granted in today’s healthcare setting, such as an x-ray machine, were at that time innovative and exciting progression for our small town.

Cline has the benefit of seeing things from both sides. Doctors came and went. He recalls Doc Gilbert seemed to make Payson home. Fortunately, for the Cline family, with their oft-mangled boy, many of those doctors made that home directly across the street from theirs. In more recent years, Cline recalls stepping into the modernized hospital, at the end of his mother’s life and feeling a sense of awe.

“It was much more like stepping into any modern facility you have down in the Valley, for example, just smaller. It was easier to find my way around.”

The progress Cline has witnessed in the course of his life has indeed been remarkable; the evolution from a local doctor and druggist, to the first early clinic excited to have an x-ray machine, all the way to the trauma center facility we enjoy today. Jon Cline has seen the whole timeline of healthcare in Payson, and works now serving to extend it further still, ensuring the progress continues to grow with the needs of the community.