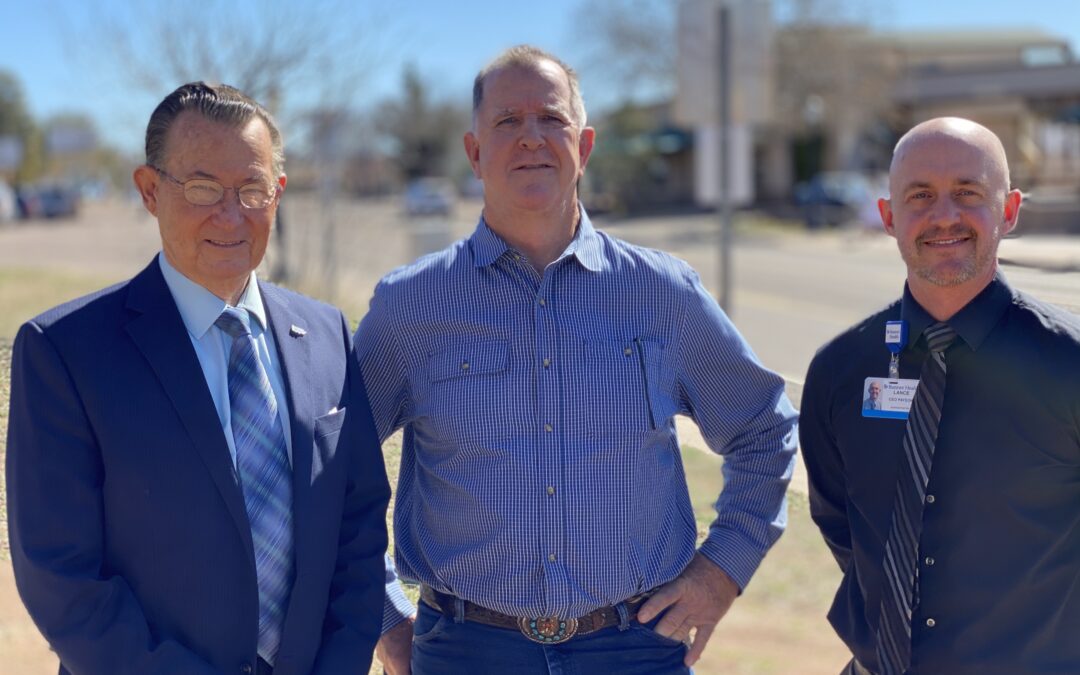 In 1995, the Payson Regional Medical Center expanded dramatically, nearly tripling in size. Evan admits a challenge early in that decade, coinciding with the huge renovation, was a nationwide shift toward greater federal government control with regards to hospital management and cost control. Large debt had been taken on to fund the enormous expansion project, totalling $15 million, which meant this shift posed a significant new hurdle to maneuver around in order to remain solvent and operational. In 1997, a reorganization occurred as a result. PRMC signed an agreement with CHS, Community Health Services, a hospital management group out of Tennessee, to operate the hospital for 17 years. During that window of time, Evans says, “CHS did a marvelous job of upgrading, truly taking the hospital to the next level of care.”

During this period, Porter was brought on to the PRMC hospital staff under the CHS administration umbrella. Porter started his career with CHS in Illinois and worked there for three years, transferring to PRMC after being offered the CEO position here. The second largest hospital system in the country at the time, the CHS business model, Porter explains, was taking “struggling rural facilities and turning them around, raising the level of care, the level of quality and raising the financial status of the hospitals. That was their business.” They did a very good job of it. Unfortunately there was a cost to such success, he admits. As was reported in the paper at the time, PRMC was operating with the highest charges to the patient in the state of Arizona. A lot of the payments were based on contracts with (commercial health insurance) payors as a percentage of charges. As a for-profit company, charges were structured to max out payments in those payor contracts. This structure, while turning the hospital around financially, upgrading and modernizing the facility, paying the outstanding debt from the 90s expansion, and ultimately turning a profit for CHS for their financial infusion and risk in taking on the cause, also unfortunately left the sour taste of exorbitant cost to patients, a downside that eventually trickled into community consciousness, a constant “bone of contention,” high prices became a resounding complaint attached to the hospital reputation.

Under CHS, excellence was always a priority. The community flourished, benefitting from excellence in healthcare during this period. Many awards were won for quality of care among rural hospitals. PRMC was recognized as a top 100 small hospital in the United States four times during the CHS era.

As the lease with CHS began coming close to expiration, assessments were made of community pros and cons experienced during the contract. Identifying cost to the patients as an obvious failing in the time under CHS, other hospital systems began to be looked at as a possible successor.

As a not-for-profit enterprise, the Banner Health System became an early contender, an answer to the price issue that was so front of mind. One of the first items addressed by Banner was constructing a new fee schedule that was “less onerous to patients.” The difference in pricing was significantly lower from the start of the new hospital administration under Banner.

Now a Banner facility for almost 5 years, the hospital remains intentional, frequently assessing and adjusting charges. In fact, Banner Payson Medical Center now has the lowest price structure of any Banner facility in Arizona. The turnaround in this area has been complete. Shopping around by patients has often been something done to find the lowest price on any given procedure or healthcare service such as MRI, endoscopy, or colonoscopy. Previously as PRMC, the hospital couldn’t compete with valley facilities. Now, as a part of the Banner System, they are proud to be able to claim not only competitive, but often lowest prices available to patients, which Porter states, is especially gratifying as a rural community hospital. “I just encourage people to get a quote,” he says. “We are the lowest by a considerable amount.”

“We have an obligation to bend that cost curve for healthcare,” says Porter. “especially in a rural community, where you don’t have a lot of the income, you have people on limited incomes or medicare only, that makes a big difference to those people that are seeking healthcare, that need healthcare, so they don’t put off care until they can afford it.” He stresses the correlation between price and quality of care.

“This is a critical element,” says Evans adds. Under the Banner model, the costs of seeking care in the early stages of a diagnosis is lower overall, to everyone: the patient, the healthcare system, the insurance payor, the community. Everyone wins when pricing goes down.

The tipping point for MHA Foundation in choosing Banner Health as the successor to CHS is the fact that Banner was willing to invest millions of dollars in upgrades to the quality of care available to hospital patients in the Payson community. Banner pledged $25 million dollars to the hospital over 7 years. The decision to go with Banner allowed the hospital to update their CT scanners and imaging.

Porter explains, “Those capital dollars are so hard to come by in any other scenario. It would have been extremely difficult to accomplish half of what has been done in the past five years without those monies.”

Additional programs and services have also recently been added to the Banner Payson Medical Center campus for patients, expanding the total depth and breadth of healthcare available locally.

Lung Cancer: A lung cancer screening program has recently launched to identify problems early. This service previously would have been outsourced to the valley. Bringing it home helps diagnose and begin treatment much earlier than would have been possible in previous generations. Costs at these earlier stages become much more manageable than waiting until the disease advances, or becomes terminal. “At that point it is definitely more costly to treat.” says Porter

Dialysis: Currently, BPMC’s interaction with Da Vita (the company that runs dialysis services in Rim Country), is as a referral source. When a doctor determines a patient needs dialysis services, they get a referral to Da Vita. Payson currently doesn’t have the population to justify a full time nephrologist (physician that specializes in kidney disease). To bridge that gap, and meet the need for patients, Banner is looking to telemedicine, contract negotiating with Southwest Kidney, the largest nephrology group in the valley, to provide nephrology telemedicine services Porter explains that will evolve over time. Initially, the hope is for Southwest Kidney to be a referral resource for emergency room physicians and hospitalists at Banner Payson Medical Center to contact when they have in-house patients with kidney crisis specific needs. The response would be provided via tele-medicine consultation to assess whether the patient can wait for local (next-day) dialysis, or if the patient has a more urgent need to be transported to the valley for kidney treatment. The hope is that this initial agreement will eventually morph into a designated in-patient treatment facility with the ability to provide comprehensive kidney disease treatment, locally. “That is a later stage goal,” Porter says, “because of the advanced level of national regulations that must be met, and personnel certifications that must be acquired and maintained to facilitate such a complex medical service.”

Physical Therapy: Traditional physical therapy is designed around major procedures, such as recovery from long bone fractures or joint replacement surgeries. Therapists that can treat in an out-patient setting, with offices next door to the orthopedic surgeon. It is a great relationship. Patients can see the surgeon, and then be referred right next door for palliative recovery care, literally one suite over. If the physical therapist has questions, he can walk right over to clarify, making care more streamlined.

Additionally, for the last couple of years, Banner has had the service called “swing bed.” Here, for example, an 85 year old grandma who has fractured a hip going down the stairs and now needs to receive the physical therapy, but isn’t quite strong enough to go home to receive treatment via the traditional out-patient physical therapy model, can now, under the “swing bed” model, be kept in the hospital and provided with the therapy, (which can include physical, occupational, or speech) for the time needed to continue to convalesce under the more highly structured and supervised hospital setting. This intensive therapy allows utilization of the same in-patient time, avoiding relocation to another level of hospitalized care, and prepares them with the tools they can use after their discharge. Upon release, patients are then more prepared for home-health, or traditional out-patient therapy.

Cardiac Care: Services have evolved for local heart patients. Cardiac issues are the second highest reason for hospital transfer to the valley. Almost 100% of those occur because the patient needs a procedure such as open heart surgery or a catheter of the arteries in a cardiac cath lab. Banner Payson does not currently have the ability to do such procedures locally. When patients return home, they still need services known as cardiac respiratory rehab. Previously unavailable in town, patients would sometimes opt to forgo the treatments, leading to continued issues with their cardiac illness, or alternately they would have to travel to the valley every day or two to address their needs, which would become tiresome. With an anticipated start date of early spring, Banner is now in the final stages to offer cardiac respiratory rehab services in Payson. This will bring local qualified respiratory therapists and monitoring (telemetry) nursing staff for rehab assessments like treadmill or stair-stepper stress tests, in addition to a mental health counseling therapist. Often cardiac issues go hand in hand with depression, Porter explains. Cardiac patients suffering from depression tend to become non-compliant with treatment, which then leads to continued cardiac issues. Seeking to remedy this, the cardiac rehab treatment uses a holistic approach to manage current problems and proactively prevent future problems. Social workers and tele-psychiatry are another part of the program to manage the mental aspects of treatment and recovery for cardiac patients. Physical fitness is stressed as a part of the treatment as well. “Get them into the gym, get them healthy, which we hope leads them to a continuing relationship in the gym outside of their cardiac treatment,” explains Porter, ideally leading patients into a perpetually active lifestyle going forward.

Future direction for Banner Payson: After decades of service, the buildings are in need of some TLC, Porter admits. A renovation has been requested from Banner that would build a new patient care wing. The current patient care area would then be converted into support and administrative areas. The plan also includes a rebuilding the emergency room, relocating the lab, and implementing the latest technology in terms of nursing communications. The vision for the new renovation means that people driving on Main street wouldn’t see a loading dock, as is currently the case, but instead a professional hospital entrance.

“That has a lot to do with the confidence that people have in regards to their local hospital. They will see a facility that is up to date and has the latest technology. It looks like a modern day hospital with the ability to treat their medical needs, and the needs of their community.” says Evans. Submitted to Banner in January, the hospital is now awaiting plan approval.

Porter sums it up succinctly, “Banner is the largest healthcare system in the state, and they do it right. They understand healthcare and the need for quality, safety, and the patient experience.